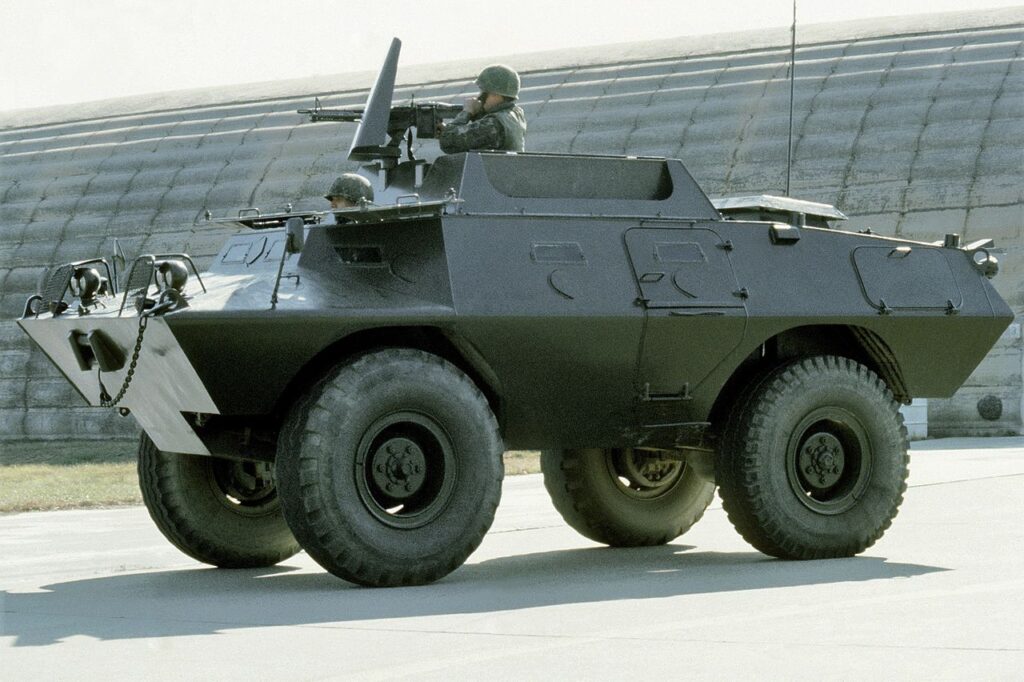 The Cadillac Gage Commando, frequently denoted as the M706 in U.S. military service,  is an American armored car designed to be amphibious.  It was engineered by Cadillac Gage specifically for the United States Military Police Corps during the Vietnam War as an armed convoy escort vehicle. The Commando was one of the first vehicles to combine the traditionally separate roles of an armored personnel carrier and a conventional armored car, much like the Soviet BTR-40.  Its notable height, amphibious capability, and waterproofed engine allowed American crews to fight effectively in the jungles of Vietnam by observing their opponents over thick vegetation and fording the country’s deep rivers.

The Commando was eventually produced in three distinct marks: the V-100, V-150, and V-200, all of which were modified for a number of diverse battlefield roles.

The V-100 series of vehicles was developed in the early 1960s by the Terra-Space division of the Cadillac Gage company of Warren, Michigan. By 1962 a patent was filed and received by Terra-Space for a vehicle then only known as the Commando.  The first prototype emerged in 1963, and the production variants entered service in 1964.

The vehicle is equipped with four-wheel drive and uses axles similar to the ones used in the M34 series of trucks. The engine is a gasoline-powered 360-cubic-inch Chrysler V8, same as in the early gas models of the M113 armored personnel carriers. Its 5-speed manual transmission allows it to traverse relatively rough terrain. The M706 has a road speed of 62 mph (100 km/h), and can travel across water at 3 mph (4.8 km/h). A Commando’s armor consists of high hardness alloy steel called Cadaloy, which protects against projectiles up to 7.62×51mm. Partly because of its armor, the M706 has an unloaded mass of over 7 tons. As a result, a common problem with the vehicle is rear axle failure caused by the extreme weight. However, because the armor also provides the monocoque structural framework, it can be lighter than a soft vehicle to which armor has been added, and the angle of the armor also helps protect against hits and mine blasts.

The V-100 was available in turret and open-top models. Factory prototype turret options included the T-60, T-70, and T-90. The T-60 featured a combination of either two .50 caliber machine guns, two .30 caliber machine guns, or one of each, and had manual traverse. The specific .30 caliber machine gun options were extremely varied, with from factory configurations including the M1919A4E1, M37, M73, M219, and MG42. Later the M60 and FN MAG were also added to the list of options.  The Cadillac Gage company also intended to use the solenoid trigger equipped fixed machine gun version of the Stoner 63 weapon system, but this was dropped after tests showed the smaller caliber cartridge to be unsuited to this role.

The T-90 featured a single 20 mm cannon with power traverse. The T-70, developed for police use, featured 4 tear gas launchers, vision blocks all around the turret for 360-degree vision, and no other weapons. The T-70 and T-90 were not put into mass production with a modified T-60, with the guns mounted together in the center, instead of on the outer edges, becoming the standard.

In addition an open-topped variant with a central parapet was developed. The intended usage of this variant was to be a mortar portee, but a total of five machine gun mounts could also be fitted. There were 2 in front, one in the rear all three M2 Browning or Mk 19 capable and one folding pintle point on each side capable of mounting any .30 caliber machine gun such as the M1919 Browning machine gun, M60 or any other machine gun of that class. An enclosed raised superstructure “pod” was also developed for converting the V-100 into either a command vehicle or for police use. The variants for police work featured special elongated firing ports for better angles of fire for tear gas grenade launchers.

Relatively large-gunned variants of the V-100 began appearing in 1964, when Cadillac Gage marketed the Commando against the Alvis Saladin and Panhard AML-90 for a Royal Saudi Army requirement specifying a wheeled armoured vehicle equipped with a large semi-automatic cannon.[14] A number of V-150s were later successfully tested and offered with a Mecar low-pressure 90mm smoothbore gun. With the new turret and gun, the V-150 was manned by a crew of three, although it retained enough space for eight additional passengers if no additional shell racks were added. At maximum capacity its hull could store up to thirty-nine rounds of 90mm ammunition and still seat four additional passengers. Subsequent V-150 models incorporated a slightly larger turret armed with a much more powerful Cockerill Mk.III 90mm gun, the same as that carried by the EE-9 Cascavel. A third fire support option involved the retrofitting of the Commando chassis with the complete turret and 76mm L23A1 gun of the FV101 Scorpion light tank.

In 2010, Federal Defense Industries announced that they entered into an agreement with Textron Marine & Land Systems in order to provide authorized aftermarket parts, support and other types of assistance for the V-100/150/200 since FDI maintains a technical library for spare parts.[16]

In 2011, Napco entered into an agreement with Textron to provide authorized aftermarket parts, support and other types of assistance for the V-100/150.

The Commando was originally deployed to South Vietnam in September 1963 for use by the U.S. Army Military Police, United States Air Force, United States Marine Corps and allied forces including the Army of the Republic of Vietnam (ARVN). It was introduced in Vietnam as the XM706 Commando first to the ARVN who loaned the first examples to the U.S. Army in June 1967. By the end of 1968, the U.S. Army had purchased its own version of the armored car, the XM706E1, later standardized as the M706. Within the U.S. Army it was affectionately known as the Duck, or the V.

The main differences between the XM706 and XM706E1/M706 were in the design of the gas tank fill port covers, side windows, front vision blocks, and most importantly in the weaponry. The XM706 featured two .30-06 caliber M37 machine guns, while the XM706E1/M706 for the U.S. Army featured two 7.62mm NATO M73 machine guns for better ammunition commonality with existing weapons. The ARVN, on the other hand, were still using a variety of weapons in the .30-06 caliber and had relevant ammunition in their supply train.

In practice, the ARVN found the standard two-gun armament to be lacking and often mounted an additional M1919A4 machine gun on a standard tripod mount at the rear radio operator’s hatch.[19] A number of their V-100s were also refitted with the combination turret armament of one M37 and one .50 BMG-caliber M2HB machine gun. The V-100 in with the ARVN mainly saw service in armored car elements of armored cavalry units, but also as part of the mechanized platoons of the South Vietnamese Regional Forces.  Compared to the American counterparts ARVN V-100 units had larger crews, including a commander riding shotgun, and a radio operator outside the rear hatch.

Another model, the XM706E2, was supplied to the U.S. Air Force for base protection purposes, post-attack reconnaissance against munitions and EOD use. The XM706E2 featured no turret and an open-topped center parapet. In practice a variety of weapons were mounted on USAF XM706E2s, but the most common configuration was one M2HB machine gun and one M60 machine gun. Other equipment included the XM174 40 mm grenade launcher and searchlights.

The V-100 carries a maximum crew of two with up to 10 passengers. In road patrol, convoy duty and base defense use by the U.S. Army’s Military Police, it usually had a crew of two: driver and gunner. Additional armament often included two or three top-mounted M2 or M60 machine guns. Other weapons such as M134 Miniguns were also sometimes used. Passengers could also use their personal weapons to fire through the vehicle’s various gun ports.