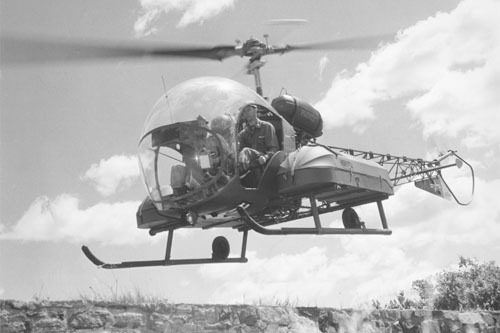 The centerpiece of the Military Technology Museum’s new second building is a Korean War era H-13B “Sioux” Helicopter, serial XXXXXX. Instantly recognizable by its bubble canopy, the H- 13B is a trailblazer in two respects: (1) it was the first production rotary aircraft organic to U.S. Army Aviation; and (2) it was the first Army aircraft named for a Native American tribe.

The H-13B was the brainchild of a young Princeton graduate named Arthur Young. Young was determined to develop a successful helicopter and, during the 1930s, he built various remotely controlled models to test his concepts. Finally, in 1941, he developed a model that could hover and fly in any direction with complete stability and control.

Young shopped his revolutionary design to the U.S. military but with no luck. It wasn’t until Bell Aircraft Company heard of Young’s model that this luck changed. After successfully testing his model at its corporate headquarters, Bell— in return for Young’s patents—agreed to underwrite the development of two full- scale research prototypes.

Young began work on November 24, 1941. The Bell Model 30 (prototype) was six times larger and a more refined version of Young’s original model. It initially made a series of tethered flights in late 1942. Yet, it wasn’t until June 26, 1943 that the Model 30 made its first untethered flight, thereby becoming America’s third successful helicopter and Bell’s first rotary aircraft.

Testing with the Model 30 led to the development of the Bell Model 47 which, on May 8, 1946, was awarded the “Approved Type Certificate (Helicopter) Number One.” This date officially marked the birth of the commercial helicopter industry. Concurrently, a small military market also began to emerge.

In late December 1946, the U.S. Army Air Force acquired a single Bell Model 47A for operational evaluation by its ground forces. Now designated the YR-13, 27 more were soon ordered with ten being transferred to the Navy. These helicopters were the first Bell rotary aircraft built on a production line. Each possessed a bubble canopy, covered tail booms, a cowled engine, and a four-wheeled landing gear with bungee cord shock absorbers to cushion landings.

After significant testing, the YR-13 became operational. The U.S. Army re-designated it the H-13B and placed an order for 65 aircraft. The first airframe for that production run came off the line in mid- July, 1948 and was assigned serial number 1, tail number 48-796. That aircraft is the one on display at the Museum.

Ultimately, all but two H-13Bs were delivered to the Army before the Korean War erupted. Yet, military planners were still considering how best to utilize this new technology. Eventually, the Army determined it might be useful in lifting wounded troops from the front lines to rear area hospitals.

In late 1950, a single H- 13B was withdrawn from operational service for use as an engineering test bed. It was fitted with the now familiar skid-type landing gear in place of the standard wheeled undercarriage. The rear fuselage covering was also removed and fitted with a variety of external stretcher-carrying configurations to evaluate its casualty evacuation capability.

The H-13B’s new role proved so successful that, in 1952, 16 more were similarly modified as air ambulances and re-designated H-13Cs. The Army subsequently ordered 87 more helicopters which were further re-designated H-13Ds. The latter was an improved version of the H- 13C, though some were used for command and control as well as transport of lightweight cargo.

The “B” model was therefore the operational predecessor of all subsequent H-13 models that would serve the military for decades. The last H-13 variant procured by the U.S. Army was the H-13T, a dual control instrument trainer in 1963.

Overall, the Army purchased a total of 2,197 H- 13s. Yet, various versions of the Bell Model 47— the H- 13’s civilian counterpart—remain in service to this day. This is a true testament to the design of Arthur Young, one of rotary aircraft’s most gifted pioneers.